Abstraction at the right level 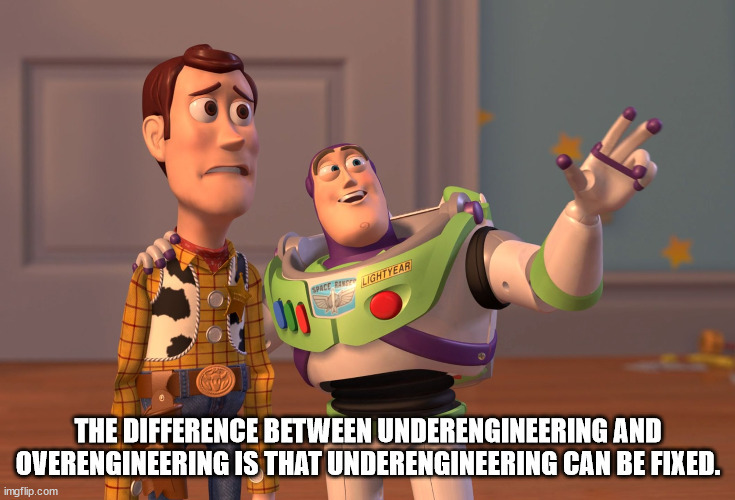 
Don't outsource your competency away

Now, I could summarize my entire presentation with this awesome paper. This is a proprietary internal secret, Boeing paper and Boeing at some point, outsourced almost everything and they ran into trouble, they had this long before the 737 MAX. Boeing was already busy outsourcing everything. And when they built the 787 Dreamliner, they found that all they were doing was drawing designs and then handing them to manufacturers. They were even telling the manufacturers look, we only put up requirements, we don’t actually tell you what to do just build us this 787 Dreamliner.

And it didn’t work. And they nearly went bankrupt over it. And in the course of a lawsuit, this paper was filed. It’s online, you can read it. And in this an engineer, Dr. L.J Hart-Smith analyzed the process of outsourcing production.

Basically, a key insight there is that when people say we are no longer going to build this ourselves, we’re going to have someone else build it for us, is that what is left of your company becomes ever smaller.

We are a technology consultant company. We build software for diverse range our institutions and we wholeheartedly agree with this assessment. You have to have your in house technology team if you can. Firms like us can speed up your development plans but you need people in your own organization that understand how technology assists your day to day business operations.

Continue to invest in your technology team so they grow and develop into something amazing. It will be worth it.


Bad software sent postal workers to jail, because no one wanted to admit it could be wrong

For the past 20 years UK Post Office employees have been dealing with a piece of software called Horizon, which had a fatal flaw: bugs that made it look like employees stole tens of thousands of British pounds. This led to some local postmasters being convicted of crimes, even being sent to prison, because the Post Office doggedly insisted the software could be trusted. After fighting for decades, 39 people are finally having their convictions overturned, after what is reportedly the largest miscarriage of justice that the UK has ever seen.

This is horrifying. Software is not infallible. It is developed and maintained by human.


A Catastrophic breach at a major Internet of Things vendor

On Jan. 11, Ubiquiti Inc. [NYSE:UI] — a major vendor of cloud-enabled Internet of Things (IoT) devices such as routers, network video recorders and security cameras — disclosed that a breach involving a third-party cloud provider had exposed customer account credentials. Now a source who participated in the response to that breach alleges Ubiquiti massively downplayed a “catastrophic” incident to minimize the hit to its stock price, and that the third-party cloud provider claim was a fabrication.

Our modern lives are shaped by devices that we use directly on our day to day activities, in our personal lives and at work. We are going to keep seeing these kind of security breaches until we find a better way to operate. This is one of the pressing issue of our software driven lives.


Everything is a software company

I mentioned Walmart earlier as a company that used trucks to change retail, but it also changed retail by presuming mass car ownership. The car industry probably created more millionaires in retail and real estate than in the actual car industry - making cars was just one industry, but mass car ownership changed everything else. I often think that’s a good way to think about the state of tech today: 80% of the world’s adult population has a smartphone now, so how many things can we do with that? That’s what ‘software is eating the world’ means. But part of that is also that Walmart wasn’t built by car people, from Detroit. It was built by retailers. Sam Walton was born a decade after the Model T, and this year’s MBA class was born the year Netscape launched. At a certain point, everyone has grown up with this stuff, everything is a software company, and the important questions are somewhere else.